Finally. . .After all the delays and bureaucracy. . .

Thursday I departed Darwin and headed south on the Stuart highway. Passing Litchfield, Adelaide River and getting as far as Katherine. 300km was far enough under blazing 40° skies to ease me back into the rhythm of travelling after the enforced break. 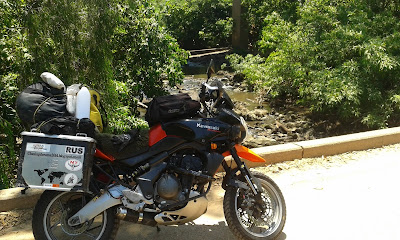 If you read this looking up at freezing dark winter skies in the UK you might have little sympathy, but trust me riding on open stretches of road with super heated air blowing in your face at nearly 50 degrees C is pretty tough. Several rest stops to take on water and I got through three litres during the day. The bike over heated slightly with the water temperature warning light illuminating until I stopped the engine whilst still rolling. Then going out when I restarted.But the air flowing through the radiator was doing little to cool the water flowing around its internals

Day Two on the road. Leaving Katherine at 8am was probably an hour too late. . Temperature already at 30° that's comfortable to ride in. Not thinking straight I fuelled up and refilled my water carriers, but completely forgot to investigate the mesh tent in the camping shop until I was on my way - not turning around!

Through Mataranka station where groups of aboriginal people sit out the heat under the shade of a tree. . One asks me the time, whilst waving his iPhone at me. . . Hang on, I thought you were supposed to know all this by the bark of the old gum tree or the quality of the wichetee grubs or something? - Guess that was in the dreamtime before "bottle shops"

During a stop for fuel and a cooling rest at Daly Waters I meet Josh riding his KTM 690 supermoto to Alice Springs. Our paths crossed a couple more times during the day. Everyone takes their rest stops where they can on this route.

After reaching the "town" of Elliott on the Stuart highway I decide it seemed prudent to move on. Not a place you'd choose to stop. moving on through Renner Springs and Banka Banka to the Threeways Roadhouse at the junction with the Barkly Highway. A mix of truck stop, camp ground. motel and a place to rest once the sun goes down. 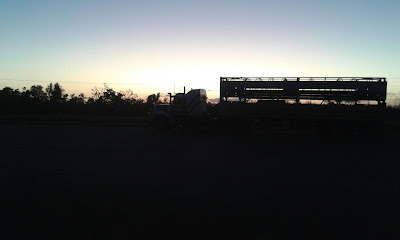 An early start at 06:30 under cloudless skies at about 24° nice! 180 easy km laters and a breakfast stop at Barkly homestead roadhouse. . Probably the nicest place I've seen on this part of the journey.

The temperature goes over 30 at 9am. . Horrible hot side winds blight the journey across a flat land of stunted vegetation. Two twisters follow me for a while, a black dust cloud being dragged into the sky on a tube of rotating hot air. The tarmac blisters in the sun as the temperature rises to a  steady 48° after a lunch stop at Camooweal roadhouse just over the Queensland border where a sign proclaims "welcome to Queensland. Set your watch 5 years and 30 minutes ahead" : it wasn't exactly the height of 21st century technology in Camooweal either! 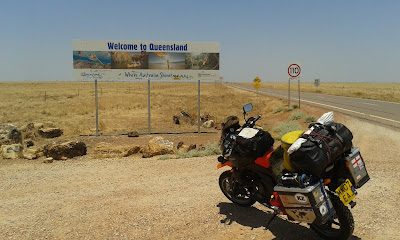 One thing most people won't experience in the pollen filtered, air conditioned atmosphere of a car is the pungent waft of the numerous large animal road kills that litter the Barkly highway as they slowly desiccate on the hot tarmac. . Buzzards and harriers it seems prefer their meat well done. . About 2 days in the sun tenderised by a few road trains thanks.

Is there any "wet" at all involved in the wet season? After the last two days I would hate to see the dry!

Sunday. I slept late. . Too late to move today. . Late decision to make Sunday a day of rest. I know what you're thinking right now. . But two fairly tough days after six weeks off the bike drained my energies, fried my senses and dehydration dulled my sensibility. No point taking unnecessary risks or pushing too hard to make up lost time. There's still enough days in the month.

The east coast is almost within reach, but I also need to speak to the local Transport and Motoring service centre about the Overseas Visiting Vehicle [Aus acronym time] (OVV) and they aren't open until Monday so it feels like the right thing to do.

Monday morning I'll call in obtain the permit and move on... After a chat with a couple of blokes in the bar (its hard not to fall into a really bad Aussie accent with some of these phrases!) it seems my original route via Normanton is probably not the best idea. Certainly a place to pass right on by. So I think I'll now travel on towards Townsville to get me to the coast quicker then make my way towards Port Douglas for a couple of days.