The world over. . Friday night. . The start of the weekend. . And everybody is out for a beer. .
Darwin is no different. Apart from the dress code (strictly summer attire) and the budgies in the tree across the road from the "irish bar"

It's not freezing cold downtown Sheffield. . But on the flip side it's not party city Spain either. . Just a few beers with all the pubs with open outdoor seating and beer by the jug. Nice place, no worries!

Tracking the slow progress of the ship that has my bike doesn't improve the situation. . Not that it's bad. . I'm just restless and ready to move on.  Nothing I can do about it.

I've got to just relax and enjoy the ride. .

Sunday morning and sitting in the park reading under a lightly clouded sky with temperature still in the 30s just letting the day drift by.

An Aussie rules "footy" pitch barks into life. Local small stadium that I can see from the road. While I'm no football fan it's an intriguing mix of sports. . football/Rugby/American football all rolled into one with what appears to be fairly easy to understand rules.  It passes 20 minutes of one quarter of the match. 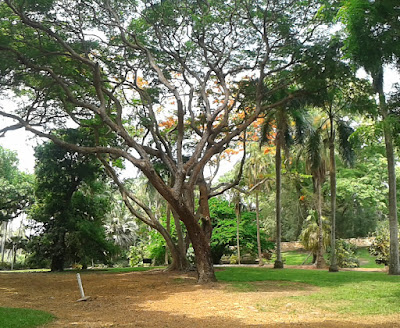 Tuesday is Melbourne cup day. I'm told the country stops for that particular horse race. . Might be worth seeking out a bar with TV to dip into the atmosphere. Not that horse racing lights my fire either! Might even put a little random bet on. . You never know your luck!
...or maybe you do! $5 bet on the winning horse pays me $130 . . Nice!

Beaches.
Lots of them. Perfect clear water. Fabulous sandy stretches. Clear blue skies and not a single person on any of them. Anywhere else there would be swimmers, surfers, divers. . But no one uses them. I know why but it's a crying shame. Swimming is limited to lakes and pools. I suppose that means the shoreline is a place for nature to live undisturbed. It's a strange situation though. 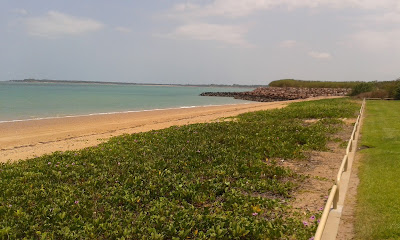 I've spent a bit of time trying to sort out insurance. It's nigh on impossible to get cover for the bike . There is a compulsory third party insurance that I will have to obtain somehow from somewhere but other than that it's the same as Georgia and Kazakhstan . . I'm stuck with it. . Surprisingly Australia appears to be a paper trail nightmare of bureaucracy. Not all states recognising the same documentation and from replies I've had no one seemingly fully understanding the system. c'mon Australia. sort it out! one country shouldn't have such a confusing system. . I've passed through far less civilised countries that manage to be far less complicated.

The ship with my bike is due to dock late on Thursday . I've been told it could take five working days to clear customs and quarantine. Too long but beyond my control.

Darwin is draining my resources and I'm getting no benefit from it. It's a good place but I need to move. To travel, to make progress. its frustrating. I know that sounds frivolous. I'm in a tropical summer in November. stop complaining, but this wasn't the plan. Then again what was?

Waiting is the hardest part. Guess its time for another beer! 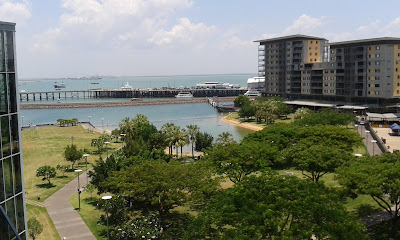