A couple of days in Khabarovsk gave me time to catch my breath prior to the final push to Vladivostok. Which makes it sound more like a route march than a travelogue but in places it has felt like crossing half the planet in one country!

The seaside feeling of Khabarovsk continues with fast food joints on the river side beach front selling the American dream, well a burger fries and a coke at least. While more traditional fare is available in town alongside another American dream in the shape of a Harley-Davidson branded bar.

As an Englishman abroad I remain unconvinced as to the benefits of Americanisation and the traditional Kvas made from fermented bread is an infinitely more palatable experience than the iconic sugary black stuff and amusingly branded in some places as Nikola (or No Cola) despite the strange thought of making pop from bread and it being sold from barrels in the street. Although the chemical ingredients of the later probably don't bear thinking about either. 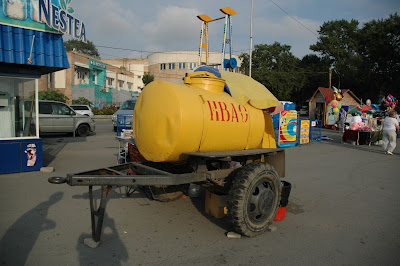 Lots of Chinese tourists experiencing a western consumerism style vacation in far eastern Russia ??? only 30km east of their border, with Japanese products, the united colours of branded clothing and like everywhere the union jack is a symbol of cool. It's a strange world we live in. Where adventurous travellers head east to experience the exotic and often find an imitation of the west. Global brands seem intent on homogenising the whole world.

Despite all that I like Khabarovsk, it is a comfortable place to be. It has the sense of being far away and yet somehow familiar, with trees and vegetation very similar to northern Europe and a summer climate not dissimilar to what we think a summer should be in the UK, without the rain! Sitting in the warm afternoon sunshine in one of the many neat parks with people strolling, rollerblading or cycling past, couples with youngsters, the gentle tumble of a fountain and the scent of freshly mown grass, it's hard to picture a frigid Siberian winter, or in fact the insect infested harshness of a siberian summer just a few miles north, but after weeks of exploring my own limits of endurance it is a pleasant feeling.

I still don't have a definite plan for Korea and shipping out of there has not yet been confirmed. . One thing I am certain of is that I will travel without the bike for a while after Korea while it gets transported down under, much like the rest of the population (sorry Australia!)

So with the world available to me at the flash of a credit card and a UK passport I will have some time to take a more usual form of holiday travel to any place that will have me.
Posted by Mark Dalton at 15:40

Hello Mark, Good to catch up on your blog after I was a month away. I was in Хабаровск in 2011. The Russian Far East in very interesting. I remember the promenade on the Amur River and the western feel. Apparently many European Russians were transported there by Stalin to reduce their influence, making it a little Europe in the far east. I'm working my way backward through your blogs so I'll keep heading west in your blog. Brilliant trip. All the best.