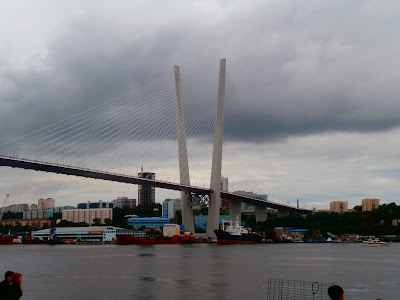 I'm here! I have ridden my little kawasaki from merry olde England to the far eastern Russian port of Vladivostok !!!!!

That fact on its own is amazing to me.
To have ridden across blazing hot desert, dry grasslands. Wet woodland and lush forests. Over snowy mountains and through green valleys. To arrive here feels like a massive achievement.

My "targets" . Assuming I ever had any. . Included getting this far. To cross the huge distances involved, overland, just me and my bike. I "celebrated" with a local cabbage salad and a bottle of kbac! LOL

My bike has taken a bit of a beating of late. Since the "off" in Irkutsk it has been through tougher times than at any other point on the journey. While Kazakhstan's roads were rough, they were dry. Russia's road works, which involves simply removing worn out tarmac, back to the rocky base for miles, are very similar but the climate isn't and a wet mix of sand, stone, gravel and diesel sets like concrete once the rain stops. A blocked radiator has caused a few overheating issues and the chain has been through a grinding paste mix. The tyres have just about had enough and riding into Vladivostok in a rain storm did little for my confidence. Time for a bit more maintenance.

The "hotel" has a jet ski garage right next door, which is handy. Free use of a power washer will make things a little cleaner to start with. The mechanic more than a little interested in my bike and how I got here. He appears to have lots going on with jet ski repairs car bodywork and what looks like two brand new Subarus direct from Japan in the compound.

The ferry operators office was closed on Sunday, but at least I know where it is and will be there on Monday morning to be ahead of the game for the ferry departure on Wednesday.

Vladivostok itself sits in at the end of the Muravyov-Amursky Peninsula in a hilly cove surrounding the "golden horn" bay where the Russian pacific fleet sit at anchor. With a modern suspension bridge spanning the water it has everything a modern waterfront city needs. Yet it still feels slightly strange to stand taking photos of Russian warships and looking at WW2 memorials when for years of my youth it was somewhere impossible to think that I would ever visit or had any desire to. This huge Russian bear hidden behind an "Iron curtain" in a dark frozen corner of the globe, the subject of many western biased news stories, the site of secret soviet and American nuclear agreements and usually home to the villains of fictional spy stories.

Next update once I've sorted the shipping! 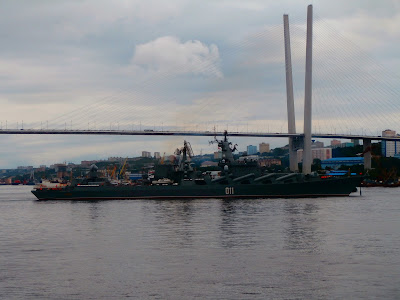