To JFK and the hop across the Atlantic

It's not over, but it's close.

London calling.
Just another big city to get out of asap. Hopefully reunited with my trusty motorbike.
I've missed my faithful travel partner. Sending it home from Australia was absolutely the right thing to do. But my journey has been lessened without it. I became just another tourist. Just another rental car on the road. Anonymous as a world traveller. The bike parked at fuel stations, cafes, camp sites and hotels was always a source of conversation. Always an illustration  of wonder and sense of adventure at the journey.

Very sad to say that this HUGE adventure is in its closing stages. I can't begin to imagine how I'm going to cope with going back to life/work and the fact of not travelling onwards continually. That I guess is something I will have to come to terms with.

I didn't set out on this journey looking for answers to unknown questions and consequently I haven't found any. I have though generated a few questions about my own life and where I go from here. With the sights and experiences I have had over the last 12 months I think my perspective has been irrevocably altered.

You are not what you own.
All the trivial things that tie us down. The obsession with personal belongings. The unimportant things that gain a higher than deserved  level of of our attention. The things that stop us from exploring everything the world has to offer and brings our focus into a narrow margin instead of raising our eyes and seeing the world for what it is and not what is reported as being.

There are lots of fabulous, amazing and wonderful experiences to grasp hold of. Switch off the news and find your own answers. They are not in the biased views of the news reports that attempts to bring a sense of community where it is divided by cultural differences and political opinions. Different people see things differently that is inherently human. Trying to pretend we are all the same is not going to work. Russians whole heartedly believe their own country is stronger and safer than any other. So do Koreans and Australians...
New Zealand is!

Local news gives a local bias to its reports. The UK is no different. The BBC is no less biased on its reporting than the Russian news agency.

London. It's bank holiday. It's raining. It's windy, It's grey. Obvious security at Heathrow. Trains delayed due to bad weather.It's England at the end of March. Ho hum.

A hotel near the shipping agents and my bike is available for collection on Tuesday. It might just be a damp ride north. 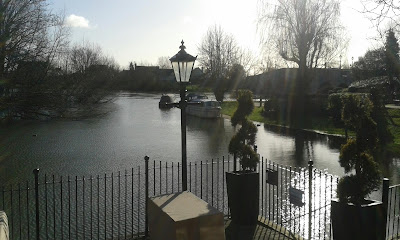 English breakfast. Well you just have to don't you! Sun shining on the river Thames.. Guess it's not so bad.

My bike is 'mostly' as I left it.. A few extra dings, a couple of extra scratches. The crate arrived damaged. It looks like it's been on its side at some point. But nothing dramatic.

Putting the front wheel back in and the mirrors and screen and it started first time. 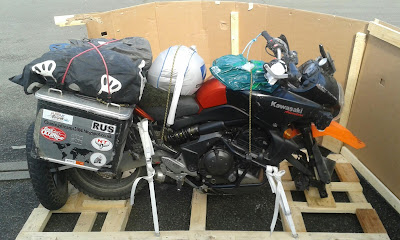 The battery had not been disconnected but was still fully charged. The oil was at minimum (another indication of not being upright?) The tyres were low on air but other than that the signs of long travel are evident and I love the used patina of the bike now.

The sense of crowds is huge. The feeling of people everywhere is overwhelming. The M25 is busy. Constant 50mph variable speed limits. Cameras everywhere. No one cares that my bike is returning from a huge adventure. No one notices the travel stickers. It feels like I need a neon sign pointing out what I've achieved. But instead I'm anonymous. Just another bike on the road. Just another bloke who obviously can't afford to run a car.

The weather is kind and cool spring sunshine accompanies me on my journey north.
Arrival at home is less appealing. It's not a place that makes me happy. No where else to go. No moving on to something new. Just back to the real world. A lack of adventure and a loss of freedom.

Things need to change. This is my next challenge. 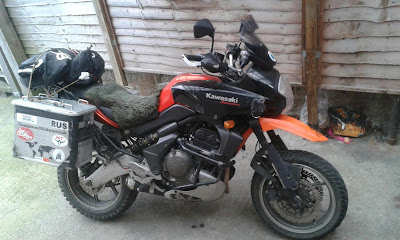