It's been such a long time,
I think I should be going, yeah


And time doesn't wait for me,
It keeps on rolling.
Sail on,
On a distant highway.
I've got to keep on chasing a dream.
I've gotta be on my way;
Wish there was something I could say. 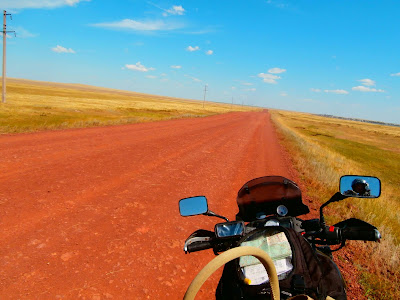 Back in a cold, over populated world filled with its own self importance is a shock to the system. Where money and status is all that matters and England's reputation as a green and pleasant land has seemingly been lost in the fog of progress.

The bike.
I was unsure if a genial commuter bike would stand up to the journey I planned. It was and is no accepted vision of an adventure motorcycle as sold by BMW or KTM. But any bike you have an adventure on works as far as I can see. In the end it was reliable. A major qualification for a bike on an adventure. The only issues were a bit of overheating in Siberia after coating the radiator with a mixture of clay, diesel and wet sand. The temperature warning light came on again heading south into the Australian outback in 40+ degrees centigrade heat. My own internal temperature warning light was glowing brightly at the time too! A failed rear wheel bearing that I replaced with the aid of a brick and a socket extension! One replacement set of brake pads and a chain and sprockets fitted in Australia.

Suspension.
Upgrading it prior to setting off was a hugely successful modification that was worth every penny. Coping with the weight I was riding with, over roads and dirt tracks. Gravel and unmade roads.


Crash bars
A useful platform for cameras. An alternative to the footrests. An anchor point for tent ropes and on one occasion did exactly what they were actually designed to do.

LED Spotlights.
Provided illumination in the dark unsurprisingly. but their main purpose was to provide additional reasons for drivers in busy urban areas to notice this lost traveller as I navigated through foreign places whilst trying to understand local signs (or lack thereof). One side still clings on with gaffa tape and cable ties following impact with tarmac and tram track in Russia.
Cable ties and Gaffa tape
Held anything and everything together when the original fixing failed through neglect or accident. including the right side mirror that suffers from "droop" but held on all the way after the same tram track incident in Irkutsk

Additional fuel cans
Were a great idea for the couple of times I needed them. They provided a comforting insurance where fuel was sparse. On two occasions getting me to the next available fuel stop. But a bit of forward planning on my part would have meant they never got used. In which case they would have been a waste of time.. But they weren't so they were worthwhile having.

Camping gear.
When a tent becomes your home it's worth having the right one. I bought the biggest tent that I could find that packed up the smallest. By the end it had a few tears and rips. The stitching was failing around the zip. But it did the job. It kept the rain out several times. The mosquitoes out in the Siberian forests and separated me from what I suspect was a bear in the middle of the night on one occasion. I couldn't ask much more from a few sheets of sewn nylon. I left it in a charity shop in Apollo Bay on the Great Ocean road. 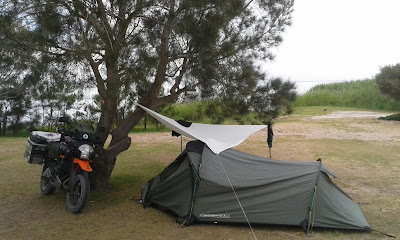 UVA sunshade
I made copious use of a one metre square sun shade with one pole and a couple of guy ropes in various configurations. As porch extension to the tent or as a sunshade on front of the bike. The possibilities were endless!

Riding gear. A RST Pro Series textile jacket and IXS trousers with removable lining and plenty of air vents meant I could cope with sub zero temperatures over the Alps and the extreme heat of the Australian outback in mid summer.

Shark flip front helmet
A fantastic aid to communication. A cool open face lid when cruising through towns and warm countryside. Full face protection from the elements and suicidal insects at speed.

Wulf Trial boots
Gave me the flexibility to be able to walk when needed and the confidence of a well protected motorcycle boot when asked.

Gloves
Two pairs of gloves both lightweight Dri-Rider ventilated for the hot regions and the full Halvarssons all weather gloves in colder climes.

Android phone .
The "all in one" adventure riders tech tool - GPS mapping via the maps.me app, eMail, phone, book reader, camera, video camera, translator, blog writing tool, online hotel and flights booking. Currency converter and online banking.  All from one device. Charged from a 12 volt connector on the bike. It was invaluable.

Guesses at distances and dates.
guesses at arrival times at borders for visa applications worked out about right. I waited in Georgia for my Azerbaijan visa to start. But arrived at Kazak and Russian borders as visas were due to start and i didn't have to race to exit borders before they expired.

Tyres.
A pair of Heidenau K73 tyres were fitted prior to departure. The rear was replaced early in Turkey by a TKC80 which provided all the confidence I needed on the rough roads and dirt tracks of Kazakhstan. The front lasted all the way to Vladivostok over snowy mountains, Hot summer roads, gravel and dirt tracks, fields! and melted tarmac, finally arriving in Vladivistok under a deluge of rain. The replacement Pirelli MT60 lasted a lap of Australia. A MITAS enduro rear fitted in Darwin, I fully expect to last until the end of time!

Money
My budget proved sound to the end. Carrying $2500USD saw me across Azerbaijan, Kazakhstan and Russia. Exchanging the last few "bucks" in south Korea. A credit card took up the slack for shipping costs and air tickets. While I didn't live extravagantly there was room for a couple of (by comparison) luxurious accommodations along the way.


Books.
28 books ranging from Autobiographies to science fiction and fantasy novels provided the literary inspiration and escape into worlds beyond our own on starry nights reading by torchlight away from civilisation surrounded by the natural world.

Me!
I didn't break or fail. Apart from a few bruises to limbs and ego nothing was damaged. My anticoagulation was simply not an issue. my mechanical heart valve merrily ticked away. My INR remained manageable throughout despite the scenes of unimaginable horror painted by the nurse in the anti-coag clinic before I left.

What didn't work or failed.

Electrical gadgets suffered the worst.
IPod.
My trusty old "wheel" ipod died of lcd failure. A cheap mp3 player   replacement survived until the last days of travel before giving up on providing and usable volume.

MUVI action cam
Failed after the charging socket detatched from the circuit board in Italy
Power bank.
One charger fell victim to the same issue. A replacement survived the journey.

HP notebook Laptop.
Survived intact and was used to edit YouTube videos until the sound card failed. It is still serviceable and this update is being written on it. So it's a semi fail.

Charging cables!
For phone and tablets. I've lost count of how many. They are fragile little things that don't take much abuse.

Air bed
Failed early on. But after a while mother nature provided a comfortable sleeping bed once I got used to her curves and bumps

Wood burning stove.
Junked after realising that pile of sticks and logs on a fire will do the same job without the need for any equipment other than want the natural world provides.

Australian quarantine.
…enough said at the time. Suffice to say highway robbery is not as lucrative
My spelling and grammar let me down frequently. But getting the story across is sometimes more important than correcting my own basic English failings
...
Like an the best stories, life goes on. I don't know where is going to go or how is going to end but there's more chapters to be written yet.

Do you ever find yourself staring at an aeroplane high in the sky and wonder where it's heading? I'm doing it a lot. 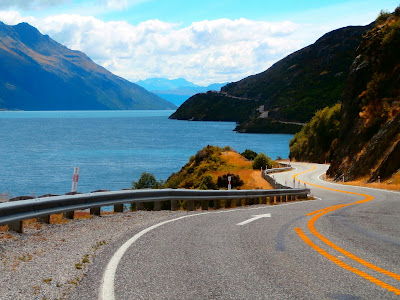 Things that spring to mind right now about the memorable bits. Crossing the Alps. A month in Italy and dark skies in the Tuscan hills. A week in Tbilisi. The crossing of the Caspian sea. The arrival in Khabarovsk after riding the trans-Siberian highway. the intense heat of the Australian outback. The great Ocean road. All of New Zealand! the Grand Canyon and Route 66. There are many many many more that will keep me dreaming of further adventures for many years to come.
Excluding flight distances(approximately 13,650 miles) I covered a total of 25,454 road miles.
I hope this blog has been entertaining, informative and even amusing at times. I've tried to write in a way that I hope has provided some insight into my thoughts and  experiences during this adventure.

I don't know know where the next chapter starts. I hope to add more as time reveals its plans to me. But for now - Thankyou for getting this far with me. "Moving on" 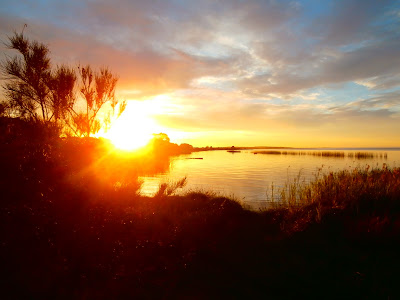 I've been having the urge to do this for the past few years now.

Glad you had a good and memory fulfilling trip Mark, it's been enlightening reading your blog as you travelled. What do you do for an encore though?

Glad you had a good and memory fulfilling trip Mark, it's been enlightening reading your blog as you travelled. What do you do for an encore though?

Just caught up with you by reading this blog. Well done on achieving the dream. It's something lots of us think about but few actually do :(
You'll have to let me know if you have another adventure, very interesting. Cheers Mark

Doug. (Met you on the channel tunnel)