Well the border entry was a mess of paperwork, stamps, signatures, officious officials,  young military guys goofing around with a ready smile until the commandant was present. Mongolian faces. Stern faces. Red tape and more rubber stamping on reams of duplicated paper forms that needed counter signatures and recording in a ledger before seemingly being entered into a computer.

You get the picture!

An Australian guy on a bike heading west was going through the same process.
The cyclists managed to get through the technicalities quicker with no vehicle to register and I didn't see them again.

A hotel at 6000 tenge (KZT) is about £20. With shower fittings that aren't, but the water is hot, the bed is comfortable and that's enough.

First impressions of Aktau aren't wonderful, it appear to be rows of post soviet housing. But there are signs of newer modern buildings and like most ports or borders I'm sure it won't be representative of the rest of the country.

A MIG fighter reaches for the sky but is permanently tethered to the ground. As an art statement I'm not sure it's a very positive one.

So plan for day one is to get out of town assuming I can find fuel for the bike and myself on a  Sunday and head inland a way. Maybe that way I can lose the effect of the ships movement that my head still seems to be experiencing.

Sunday, realised I've slipped another hour. .hadn't noticed last night . But then I didn't notice a lot by the time border patrol had fried my patience.

The road to Beyneu was mostly ok a lot of it brand new . . But a big section in the middle was very hard rough track..

I need to rethink some of the routes and distances I can cover in a day.

2 nights in Beyneu at a comfy little hotel gives me time to check the best routes that my little Kawasaki can deal with and by lucky circumstance avoid a massive thunderstorm with enough rain to fill the deepest of craters in the roads. . That would have been interesting!

So a ride to Atyrau was an easy 400+ km on good roads and relatively cool temperatures. I was expecting 40 degrees in the desert, but early in the day it was a comfortable low 20's. 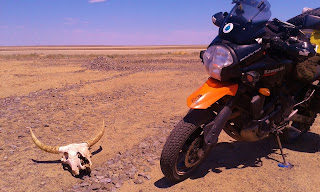 From Atyrau I will head north to Uralsk and then south east to Aktobe. Its a very "long way round" but the only option to avoid a difficult road that I think would be too much for the Kawasaki to deal with. 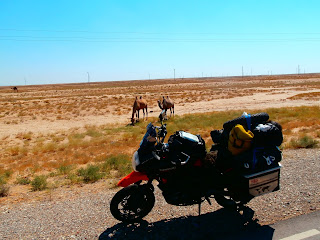 Mark, following you all the way, one thing that I am sure you already know is your YouTube videos look great but sound awfull wind noise on 90% of your videos make it impossible to hear you, not a critism just don't want you to get back and only realise then that you essentially have been chatting around the world and nobody heard what you said.. Take care and put the mic in a sock or something!