I know I've talked about inner country contrasts before but kazakhstan is the biggest difference I've noticed so far. While Georgia and Turkey showed dramatic differences between rich and poor. Haves and have nots, Kazakhstan has all that and more. Seemingly wealthy and "western" influenced major towns with every modern convenience. In Atyrau  ipod equipped roller bladers, cyclists and joggers share the river side with old fellas chewing the fat while they keep a sharp eye on their fishing line out in the Ural. Yet only an hours ride out of town rough breeze block buildings cower in the midday heat in dusty wind blown steppe. Air conditioning is THE luxury to have. And yet there are still teenagers with their nose buried in a mobile phone where ever you are. It's a universal truth.
The 21st century reaches even the poorest areas when the youth of the world need to access Facebook.

A two night stop over in Atyrau gave me time to rationalise my luggage a little. I haven't used the water container I'm carrying and other non essential items have been given away or left for any potential scavenger. I need to shed some weight and make life easier.
"We carry our fears in our luggage" was a word of wisdom I heard recently and it's true. Carrying everything I think I need is pointless. I either use it or its not worth carrying. The bike is significantly easier to handle as a consequence.

Tomorrow I head north to Uralsk, still on the Ural river it seems to be a place where maybe I can spend a little time before moving on again. Kazakhstan continues to be a land that opens your mind to new experiences. Wild, wide open spaces. Vast  windswept plains. Dry rivers and lakes baked dry by the sun. Camels, horses showing little interest in passing traffic even when they they stand in the middle of the road trying to stare out an 18 wheeler truck. I give way to a camel every time on my little bike!

Sand blown towns. Oil rich, modern cities. Poor Russian leftovers, new Japanese 4X4's and policemen with big hats. New tarmac. Lots of big road building projects and roads that don't even come close to the adjective. A dirt track would be a compliment. I'm sure there are areas on the moon that are easier to navigate.

But in the end it is a country struggling to drag itself into the present day and overthrow the image presented by one comedy actor. I like it's spirit. It's people are as hopeful and modern thinking as any other I have passed through.

Thursdays 500km ride north to Uralsk on the first leg of my 1000km diversion was a seemingly unending straight road across flat open scrub land. This north Western side of Kazakhstan makes even Holland seem mountainous!  Huge, vast sweeping vistas to the  horizon and beyond sight populated by Camels, horses and remote low rise towns baked to a dusty crisp. Solitary people waiting for a bus ride literally in the middle of no where. I spent a while trying to figure out where someone like that had come from or was going, to be standing at the side of the road in the midday heat.

I met two bike riders on the way. The first while I was still in Atyrau. Two up on a Ukraine registered BMW K1300 he was following his built in sat nav and heading direct to Aktobe. I offered him the advice I was given about the road and suggested that if a rider on a KTM adventure had found it difficult he might struggle on his continental cruiser. I don't know if he took my advice or decided to find out for himself.

The second were again 2 up on a Russian registered BMW F800. I pulled up as they were stopped at the side of the road. All was well, but it seemed the pillion was less than happy. A thumbs down signal with the words kazakhstan said it all. They were running for home and the nearby Russian border. They whizzed past me a little while later with a wave that I  returned when I again passed them when they stopped a short while after. Not enough seat padding I suspect.

I pre booked a hotel in Uralsk. Simply because it saves spending ages finding somewhere and sorting out prices and such. In this case booking.com came up trumps and a 4 star hotel at 3 star prices provides a welcome touch of luxury on the trip.

From Uralsk I will again start to head east and back "on route" with 11 days to go to the start of my Russian chapter I've got time to take it easy and explore the areas I stop at and that's just fine by me. 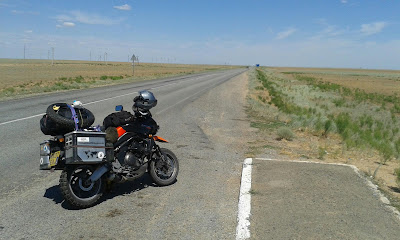 Hi, it's Evgeniy.
I told you about Walter. This is his site http://www.sibirskyextreme.com
I think you know him.