Well that's that. . After a week out of town offline from the connected world I've re-entered the 21st century.

The bike is in a wooden crate and will soon be on its way by sea to antipodean shores. Guess I had better be there to meet it!
In the meantime I've got time to spend travelling to exotic shores for a little RNR.

So an island off the coast of Thailand beckons for the coming weeks.

South Korea is a heady sometimes difficult mix of traditional and modern. It is very unlike my own and probably most people's preconception. Dog isn't on the menu of every restaurant and rickshaws don't fill the narrow streets instead wide well surfaced modern roads are populated with 21st century cars. And as I've already talked about burger bars and western food is easily and readily available.

Outside the crowded towns the countryside is lush and hilly and beaches are good where you can find space away from fishing villages.

But now I'm on my way. . I've avoided air travel on this trip so far but it's not very realistic to travel this leg by ship so airline ticket in hand I'm about to board the big silver bird and take to the sky. Ko Samuai island is my destination. Soft white sand. Crystal clear waters and a beach front apartment will be home for a couple of weeks before I get myself to Darwin to collect my bike.

Expect pictures of palms and sunsets over the beach in my next update.
It's a dirty job... 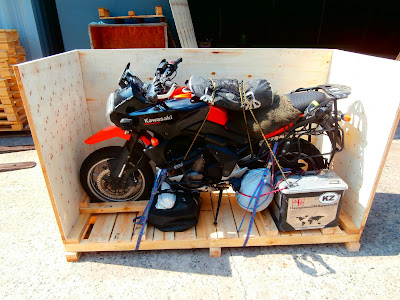 Hi Mark .. looks like your having a great time .. skint yet ?