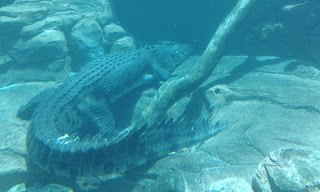 A few days into my time in Darwin and I'm getting a feel for where I am. Finding your way around a new town is always an interesting time and this small town is no exception.
It is a small town. The central district just a couple of miles square making it easy to navigate and everything I might need before I venture into the outback is available in town. What I need depends on what the customs man decides I can't bring in to the country via the crate containing my bike and travelling gear.

I have sourced a replacement rear tyre for the bike at a kawasaki dealer on the outskirts of town. The tyre has been put to one side for me, I just need the bike to put it on. At least the ship now appears to be en route to Darwin..

In the meantime I've rented a car to get around a bit and have looked up a few tourist destinations to visit while I have the time.

With the weather at a constant sunny 34° it's summer time and despite the empty beaches and waters inhabited by deadly stingers there are safe places to take a cooling swim.
Inland billabongs and cascading waterfalls are apparently a local favourite. . Somewhere I will look into while I have the time. 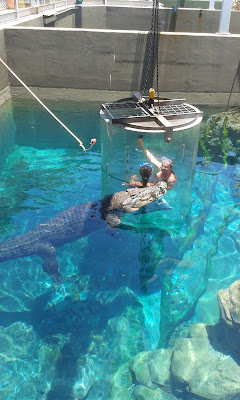 I visited a crocodile tourist attraction.. The "swimming with crocs" (in a glass cage) was appealing until I worked out the cost for 20 minutes in the pool.. Think I'll save the money ta!

The "Darwin waterfront" has a wave pool and a safe harbour for swimming with a small man made beach and grass banking. On a hot day during the week it is relatively quiet and drying off in the sun with my book to read after a cooling dip has been a favourite way to soak up a couple of lazy hours in an afternoon.

I know England will be turning towards winter so I'm sorry to report that the Australian spring is more than pleasant. But then chasing the summer around the world has always been part of the plan.

After mooching around Darwin central for a few days I took a trip out into the "bush" at an area called Litchfield Park  (which sounds more like a horse race track!) It's a 1500km² natural area about 100km south of Darwin.

Without the car it would have been mostly inaccessible to me. But after an hours drive the modern world fell away, to be replaced by low trees with dark lower halves recording the effects of the last bush fire and white new growth branches on top. Apart from an itinerant herd of (bloody big) cattle wandering across the road causing me to make a dramatic reduction in speed the countryside seemed a little devoid of wildlife as it baked under a 39°C afternoon. I've yet to see my first Kangaroo, but I'm sure my time will come!

Passing a sign to "Lost City" (surely not lost anymore then?) and with nowhere in particular to aim for the first signpost that didn't specify the need for a 4WD vehicle pointed me to "Florence falls". Despite the in car aircon the chance to cool off a bit was too good to miss and despite the climb from the viewing platform to get there is was worth every minute in the plunge pool under a natural power shower. 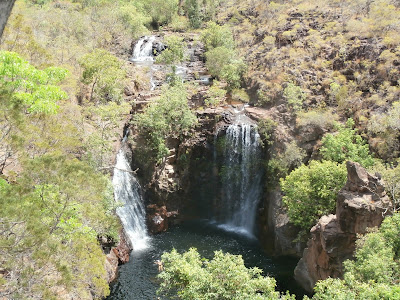 Further on a second waterfall sign tempted me again to Wangi falls. Again too much to resist under the heat of the sub tropical sun.

Travelling back with the car windows open. (I'm trying not to rely on the aircon too much as it doesn't help acclimatisation) I thought about the challenges ahead once my bike arrives. With approximately 2000km to travel to the east coast it will be quite an undertaking. Although having crossed Kazakhstan in July, not one that I'm overly concerned about. And with no need to cover big distances as I did in Russia, I plan to limit the mileage to manageable levels each day and take my time. There is plenty of fuel stops and roadhouses on the route so finding a place to stop each evening shouldn't be an issue. Even so travelling all day in near 40° temperatures will necessitate a little forwards planning for being a bit self sufficient with water supplies.

But that is all to come later. For now the adventure is exploring this part of the Northern Territory and enjoying the season.

Still enjoying the reading and curious what you have been up to and where you have got to :-) Sue Leet