Time and relative dimensions in space

"Travel broadens the mind". I must have heard that phrase an infinite amount of times in my life. My parents exposed me to to the joys of "being abroad" from the age of 11. Living the good life in the middle east in the early 70s. I remember though that although money wasn't short in the family we always travelled home to the UK for holidays. I don't know why. Hey I was just a kid along for the ride.

The point is that despite the mind expanding attributes of travel, we never forget who we are or where we're from.. Even if that is the raison d'etre of your journey (it isn't mine).  Fifty two years of programming to look right first to cross the road isn't overridden easily.

I'm fairly used to being an "odd one out" as well. Ever since I grew tall relative to most, people in the street seem to have thought I was blind and deaf to points or loud whispers. But in Korea I really am an odd European in a population of Asian faces.

Korea is a confusion of culture for me and I don't mean that in a bad way. It has obvious American influences with 7-11 shops and coffee bars. The golden arches don't appear to have pissed on everyone's burgers yet though. A multitude of mediocre motels and a yen for modern tech.  It's difficult to spot if the cars are Korean or European. . (There's a game in itself).

Most signs and shops have English translations alongside the native language. I can't imagine the UK having non English signs for the benefit of other cultures unless it's a document from Sheffield council.

Were I to choose to seek a life outside of my country of birth, I do know my choice wouldn't be here as much as it wouldn't be some southern Spanish resort with English breakfast on the menu. There is a balance between familiarity and being out of step. Modern Korea has everything someone might need, but it doesn't have enough space for me.
With time to spend, I seek peace in shaded gardens and woodlands, away from the manic race of life in the big cities. Nature gets squeezed in our ever expanding population of the planet. When I thought I was absolutely in the middle of nowhere in Kazakhstan there was inevitably someone waiting for a bus. So in a small country like Korea it's easy to feel hemmed in.

Next week I venture back to Busan for my bikes appointment with a box. In lots of ways I'm looking forward to "moving on", the phrase that has became synonymous with my journey and one I haven't put into practice for a few weeks now. Therein lies the root of my thoughts I think. It's been an education but I don't feel the need for further study.

A beach and some time to clear the interference from my head will cleanse my senses.
Having re-read that it sounds like I'm overly unimpressed which I'm not, if you follow my double negative. There's a lot of good things I have seen here. I have got similar feelings in almost every large city I have passed through. It's a sense of disappointment at human society. Homeless people  sleeping in the station. The race to have everything now. Convenience food and throw away society. Cigarettes outside and forget your insides. Less personal space and build upwards.
What's really important? I think that has to be a personal choice.
Switch off your computer and explore the world. It has a lot more to offer than some virtual reality or towing the corporate line.

Everyone has had a holiday they remember. A place where real life is set aside. The daily pressure of work parked for a while. But really, why can't life be like that? I'll tell you why. . It's because you've got caught up in what you think is important. A new car, the latest phone, providing everything your kids with every modern need. Having new clothes or the latest shoes. Making your house as nice as your neighbour's and filling it with cinema sized TVs, but it's all frivolous.

As I look around 99% of people are using mobile devices. (Ironically so am I) Drivers are impatient because someone paused at a red traffic light. There's no time for each other any more. No time for thought or accepting others choices.

While I'm not ready to live a hermits life in a cave, my travel expanded mind has yet to come to terms with a newer understanding of what makes me tick. .

Apart from my mechanical heart valve. 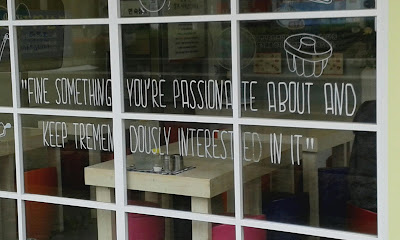