Busan is another big city. .

Another mix of tall buildings and crowded streets. Not my idea of a good time but it fills my needs at the moment as I seek out transportation down under without resorting to stealing a penny bun!

It's a cool place temperature wise at a comfortable 20° and there's lots of American influences with coffee shops on every street and 7-11 stores on every corner. But as the Americans continue their "mutual defence treaty" in South Korea that has been in place since WW2 I guess it's only to be expected. The centre of the part of town I'm in has a plethora of shopping with everything available in all the well known shopping chains and lots that are unknown to me. .. . Although that doesn't mean much given my love of shopping. . . Food places of every flavour from the ubiquitous burger bars to seafood and traditional noodle and rice restaurants.  A pan pizza is literally that with a pancake thin base! 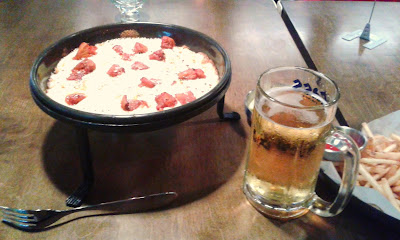 Unfortunately airtight sewer covers are not part of the street furniture and the waft of noodles, spiced meats and rice being prepared by street vendors is often accompanied by a less enticing aroma 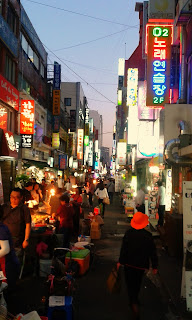 I found a small customs bike shop who seems to build street bikes and track style Harley's. He is trying to source a  tyre for me, but if not I'm comfortable that the last of the rear tyre will last for my time in Korea.

A "famous" beach in town is less attractive than the less hyped beach just outside the stylish busiest area. But there are large areas of wooded hillside visible from almost anywhere in the city. I'll make some time in the week to see if they are navigable on foot

I'm struggling with the language. So far on the way I've made a sometimes valiant effort to speak at least a few words when conversing with the locals but Korean will just not stick in my head as I try to wrap my tongue around the strange mix of consonants and vowels in odd orders. . I managed better with Russian and that's saying something!

Busan is somewhere that is easy to get on with, but would become tiresome. At least for me if I were here for a length of time. . I need more of a sense of space than is available just like my time in any urban space I have stayed in along the way. Less people and open skies work for me.  In the meantime I'll indulge myself in the modernity and avoid the crush of traffic and the scooters using the pedestrian crossings where I can. 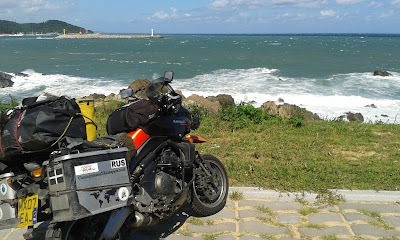 Hi Mark, you really impressed me. Let's have a drink when you come to HK.. I do think you have a lot of fun story can share with me.

Hi Mark, you really impressed me!! Let's have a drink if you come to HK. I am sure you can share a lot of fun story from this amazing journey !!