So kazakhstan finale dawns and time to reflect on the experience. Kazakhstan is absolutely vast. Massive open plains. Huge desert scenes.  Incredible seas of grass steppe that meets the cerulean sky at the distant horizon. Those more than anything will be my overriding memory of this country.

Although I fear the state of some of the roads may well be a resonant memory. There is a big road building programme going on and in the next 5 to 10 years Kazakhstan will have a viable roads infrastructure, so in some respects I'm glad I've seen it now because despite the attention grabbing pot holes, rippled, broken down and just plain horrible tarmac in places it somehow fits into the tableau of the country. Lines on a map do not necessarily mean there is a physical road in this country.

Zebra crossings in the middle of nowhere I can only think are for the benefit of Camels, but they don't seem to have understood the irony. Similarly, bus stops and road junctions that can't possibly benefit any potential customer are placed miles from any occupied areas.

Everyone I've met has been genuinely pleased to see a tourist in their country. Lots of car drivers waving and tooting as they pass in either direction.

It can be a dusty, hot, dirty frustrating travel experience. You could easily think of the negative things that are part of the daily reality in Kazakhstan. But I like to think it has been a positive time. While it's true there is not a lot to see in between destinations, that remoteness is in stark contrast to someone more used to a country that is ten times smaller in area with four times the population!

My last night in kazakhstan was spent in Semey. Which from 1949 to 1989 was the site of Russia's nuclear test facility. Not a place to linger long! But a sunny Sunday stroll in the park doesn't reveal any of the substantial issues that have been evident from the exposure to the fallout from 456 explosive tests.

So that's that. . Two weeks to cross Kazakhstan was a viable timescale. Did I need off road tyres? Probably not in reality. They were useful in places, but there is enough road to not warrant that capability. I now have 3 weeks to get to Vladivostok... 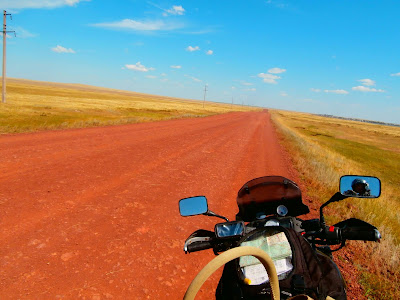 Hi Mark! Did you forget or throw away your water bottle in aktobe ?