Wednesday mornings news showed little hope of typhoon goni weakening its hold on the south China sea and the shipping agent confirmed there's would be no departure today. So as the rain increased to a steady downpour over Vladivostok I sorted out a room for the night and have an extra day in town.

My bike it appears is already aboard as it's gone from the customs dock along with a few other Korean registered bikes.. well at least one of us is on the ship. It's also one of us dry as the steady downpour turned into a torrent. Any sight of the sea disappeared in a curtain of rain as strong winds swept though the water front streets driving people to seek shelter.
A comfortable apartment is my own overnight shelter from the storm.

Thursday morning dawns calm but overcast. As I walk to the port there is blue sky on the horizon which I hope bodes well.

Waiting at the port I seem to have become something of a celebrity as the Korean and Japanese tourists marvel at my height. . Regular group photos ensue. I'm tall for Europe but hugely so in the far east!

Aboard the Eastern Dream everything has changed. Korea provides the currency, the traditions and the language. A small gathering around a stove cooks what appear to be small omelettes in a tiny pan. Although the ship has all modern conveniences some of the cabins are simple mats on the floor. 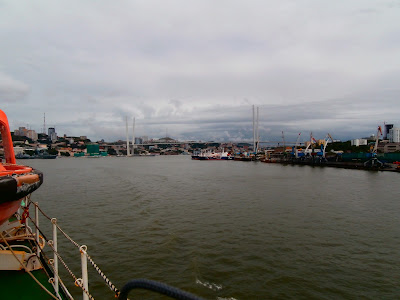 As we clear the islands around Vladivostok the skies clear of grey clouds and a relatively
calm sea welcomes the eastern dream.

Mark , you not just tall , you a giant .. think Gulliver . i hope you were charging for the photo op.