Well the modern day route from Chita to Kabarovsk is nothing compared to the pre road days. Prior to the road openeing in 2004 making progress was measured in metres not kilometers. . Hundreds of them at a time!

Khabarovsk. . At the end of a long 2100km ride is something of an oasis . A modern city on the banks of the wide confluence of the Amur and Ussuri rivers and only 30km from the Chinese border. Like everywhere else in modern Russia western brand names are on the high street and teenagers wander around with iPhones and trendy headphones. This far east the locals are more likely to speak Japanese than English and almost all the vehicles in town are right hand drive Japanese motors. It feels strangely European despite being about as far as its possible to be from that western influence. With a beach on the river and pleasure boats cruising the waters it has a coastal ambience as well, although I'm not so sure about the quality of the waters!

The journey here was very different. With almost no civilisation after Chita apart from truck stops, remote fuel stations and the ever present trans Siberian railway. The "super" highway to Vladivostok doesn't include the small towns en route and consequently appears to have brought little benefit to those communities who still rely on the railroad to make it through whatever the season. 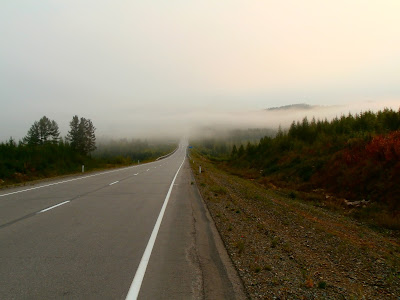 Chilled early mornings are definitely autumnal in places. But the days warm up considerably and the squadrons of mosquitoes still believe its summer with vicious attacks on any single patch of exposed flesh.

I passed a few bikes going west A single bike late in the day on Saturday when I was slowing in places to look for a camp site. A
Honda Transalp I think with a yellow registration plate, but he didn't slow as he passed. I hope he found as good a camp site as I did. Then early on Sunday a group of bikes all waved enthusiastically as they passed led by a BMW GS adventure and followed up by a similar bike it looked like an organised trip?

Two nights wild camping provided the rest in between covering the distances required to cross this section of  the journey. The first night in a disused quarry provided a sandy bed and a small fire kept the worst of the insects at bay for a while. The second night in a small woodland just off the road was equally peaceful but without the benefit of dry wood to get a fire going. However by then I had lost any idea of the time zone so was content to sleep when it got dark and move on when it got light.

The scenery varied from vast swathes of deciduous woodland, marshland and coniferous forest. Valleys and hills and rivers too numerous to count. Crossing this land prior to the road must have been impossible. As indeed to Mondo Enduro guys endured in the 1990's taking to the ever reliable railway in the end.

Just to try to put it all in perspective for the UK readers, its like travelling from lands end in Cornwall to John O Groats in Scotland, then turning around and riding back to the English border. All without passing through any towns or villages. Just a vast wilderness that used to separate the far East of Russia from the rest of this huge country. 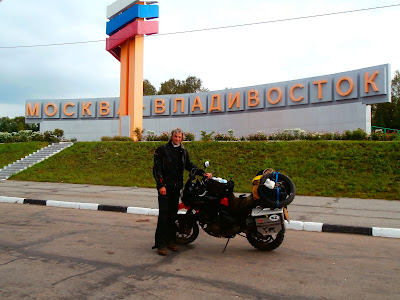 Now I'm in Khabarovsk I intend to take a little break from travel and enjoy a few days off. I don't have to be in Vladivostok until next week to catch the pre booked ferry. So I can take a bit of time to fix a couple of issue with the bike and have a look around this town. I have seen a Harley Davidson branded bar. Might have to visit that with my Triumph Tshirt on!

Glad you made it across that dreaded 'gap' in one piece,
all plain sailing from now on... lol

so jealous.. planning a mini one next year, keep enjoy

Good to hear you had a few nights in the forest there. No signs of bears? Other wildlife, maybe Siberian Jays . . . . ? Don't suppose you saw any cyclists on the route?