If you have the (mis)fortune to find yourself in Uralsk, make sure you find yourself a room at the Pushkin hotel. Named after a Russian poet, it is the only gig in town worth being at. It felt slightly hedonistic to book a 4star hotel on this trip, but the modernity on offer is in stark contrast to the real world outside it's front door.

To be fair to that little town it does try. . In the end Kazakhstan's end of term report could sound something similar to my own school reports. . . "tries, but could do better"
The main street of Uralsk is a blend of old colonial pre communist soviet buildings, a church from the 16th century, neat parkland, the ever present mighty Ural river, a sense of being closer to Russia than its Kazakh roots, modern art as a memorial to the red army and a hotel that insulates you with modern western influences.

That brief diversion from the way of life I have was very welcome. Not that it's difficult to be as nomadic as I am, it was just nice to find somewhere that was easy to communicate.

Fast forward a few days and I've travelled from Uralsk to Aktobe. An immediately forgettable location. A simple hotel provided a day to prepare for the long ride to Kostanay. A distance of 800km over roads that sometimes were and sometimes weren't. A testing day saw the scenery change from dry vistas that have characterised my journey through Kazakhstan so far to a far greener and consequently wetter area. Grass steppe populated by large numbers of huge birds of prey, that after some investigation appear to include eagles, buzzards and harriers gave way to farm crops as far as the eye could see. The thought of preparing the ground or harvesting those crops boggles my mind! it must be a huge undertaking if your field is the size of an English county!

I posted a youtube video of the many and varied road conditions. Making progress was sometime a slow and painstaking affair.

After arriving late on Monday in Kostanay I stayed 2 nights on the outskirts of the modern little  town, before again undertaking what turned out to be a mammoth trek to Astana. The first 100km of this 700km journey was easy enough with good tarmac under the wheels. Northern Kazakhstan is about on the same latitude as northern England and under typically cloudy 12°C skies it was cool enough first to swap to my heavier (warmer) gloves and even to switch the heated grips on for the first time since the Alps.

As the weather darkened so the roads deteriorated from older tarmac to my personal favourite of deep potholed badly worn out tarmac to tarmac that no longer fitted the description. With rain now falling it was "pot luck" to avoid the deepest holes. As if that wasn't challenging enough the huge expanse of open flat land allowed me to see huge rain cells approaching as the clouds darkened still further. In places it wasn't possible to see the horizon as the curtains of water obliterated the view. 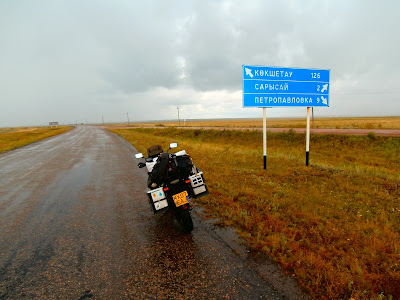 Taking shelter from a particularly hefty downpour in a fetid bus stop I met a guy who was hitch hiking from Tbilisi to Mongolia, just for the fun of it! - And people think I'm adventurous!

Some 500km into the journey the road arrived in both Kokshetau and the 21st century, with a 3 lane motorway conducting me all the way to Astana through continued downpours whilst keeping a further weather eye on cars stopping at the roadside to purchase fruit goods from vendors, itinerant farm animals and wandering pedestrians. On a 120kph motorway!

I have an 12th  floor apartment in Astana until the weekend when I will move close to the border prior to rushing into Russia.

It sounds very reminiscent of my time in Georgia I wish I was there with you you have spurred me on to get my jeep done ready for. My big adventure well done simon(affy)Ogden