(This blog entry and the ferry crossing entry will be posted after the event . .so be sure to read them in sequence so they make sense)
. . . . .
Well. . Kings pawn to e4 and check mate. . . Snookered behind the black and match point. They win I lose.
My only option on Tuesday has been to leave the bike parked in the customs area at the port because I am not allowed to ride it with the transit permit expired. It will either be ok or it won't.
Make or break point at the minute. If everything goes missing before I get back to it my trip will be changed. I hope the officials are as official as they seem. I'm sure I'm not the first to go through this loop.
In the meantime. I've got a hotel room and a phone number to call for news about the ferry departure.
Just got to sit tight and wait now, making a nuisance of myself to Vika on the phone until she says yes. She's the dame with the game and although I have the entry stake I don't know where the table is or which pack of cards we're playing with.
Good news time though is that the wonderfully efficient south Koreans have allowed me to reserve the ferry from Vladivostock online already. At least I know when that boat sails.
There's no immediate concern now. My personal visa is valid till the end of the month by and once the stars align I'll be gone. Getting to the Russian border by the time my visa starts shouldn't be an issue I hope. And if time and distance proves to be more critical in Russia  there is always the chance of boarding a train for a few miles .
. . .
The next day I get a positive answer from my morning phone call and am directed to get myself to the ticket office ASAP except no one seems able to give me clear directions to where the ticket office is actually located.  After chasing a wild goose all over town, I finally track down the mysterious Vika and I grasp the golden ticket. She says I should go straight to the port.
So just after 2pm i get to Baku port where the customs man tells me the ship is actually departing from Alat. . About 70km south west.
As my bike has been parked (safely as it turns out) in the customs office because the transit permit has expired that might be a problem. .

With no clear understanding of where I'm going I take the coast road out of Baku figuring the port will be by the sea! Near the town of Alat a sign to Baku international trade port looks right and is. . I think.

A police man says yes when i say kazakhstan?. . . I think.

The one man on duty in the eight possible passport control booths at a newly built gate with multiple lanes marked for trucks cars and vans says wait . . I think.

So I settle in what shade I can find for a while . .10 mins later he calls me to his post marked as exit only. But hey he's got a choice of any of them.
Check documents, waved through. Pointed to customs office where a nice lady . . . I think. . Glances at my passport and shoos me away. .

Ride up the empty port road where a train is being shunted aboard. .While I wait, I'm directed to an office where a nice lady. . I think, takes 5 Azerbaijani manat (about £3) for something or other . .And I'm given another  ticket and directed aboard the Karabakh. 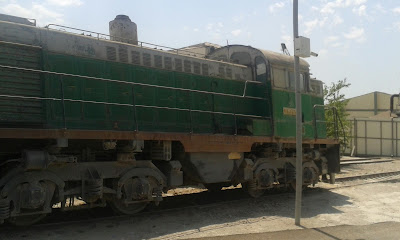