Not very long after my last blog entry but another internet access opportunity. .
Thursday saw my biggest day riding so far, to get from Bandirma to the black Sea coast at Amasra.
I spent most of the day with one or two of my triangle pieces complete. . Fuel and food on board.  Heading towards the coast i wasn't concerned about finding accommodation and I was right.
525 km in one day saw me across the hills that separate north and the middle. The roads varied from new motorway to worn out dual carriageway to broken down tarmac and plain rutted gravel. Some were half built and some were half ruined.
Likewise the countryside was dramatic. In places hot and dry, arid land littered with human detritus which gave way to softer greener landscapes as I climbed into the hills. The traffic went from modern cars, coaches and trucks to older Fiats, FSOs and Renaults. And temperatures from fearsome 30° to a chilly 15° in the mountain rain and a comfortable 20° on the coast.
Ying and yang. Most Turks don't seem to feel the need to clear up their rubbish it seems, indeed the countryside appears to offer the opportunity to dispose of everything from building rubble to household waste. In contrast it also seems to offer a million opportunities to plant a huge turkish flag, lest you forget where you are. It's a shame such national pride isn't reflected in their respect for the natural world.
Travelling the Black Sea coast road from the picturesque seaside town of Amasra was wonderful. A lot of the scenery felt like north Wales, with wooded hillsides soaring above blue green sea and stoney beaches. The road twisting and turning through valleys and over hills. It needs care though because the surface was once again along way on its journey back to nature. Rutted and rippled on the way into a corner,  littered with gravel on the apex and slick smooth worn tarmac on the exit. Most bike riders worst nightmare.
Still fun though!
By late afternoon I reached the historic port of Sinop. Full of ancient history and folklore and home to modern shopping on the busy main street and rows of old ships propped up on dry dock blocks down by the port. 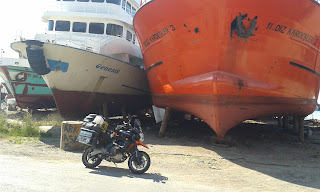 A campsite by the sea on the leeward side of Sinop's isthmus provided the nights accommodation for about £7.
Turkey is a land of contrast. Good and bad. The people I've met seem genuinely friendly. While I'm sure there's lots to see if you were to take the time, I am just pushing on for now. My Azerbaijan visa starts in 6 days and my kazakhstan visa 12 days after that so it's time to travel through this land and see its virtues as I pass by, which actually is probably for the best. because if you look too closely, it is less appealing.
A bit like the famous sweet. Initially sweet and sugar coated, but strangely sickly and less cohesive underneath.
Posted by Mark Dalton at 19:43