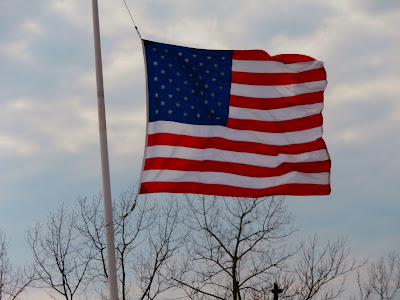 The wide deep waters of the Hudson river are surrounded on both banks by heavily tree'd country. At this time of year these trees are leafless. I imagine during the summer and probably especially in autumn the scenery would be amazingly colourful.

The towns and villages in the area do look to have been hit quite hard by the financial crash. Huge shopping malls have lots of empty lots. There are "abandoned" business premises all over the place. I guess the cost of living out weighs the cost of a steak. Especially when you get a side order of fries, and everything that goes with it.. Most people seem to have done just that! 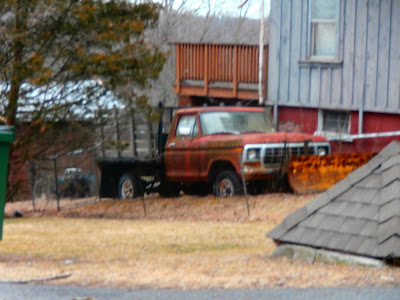 I've seen lots of TV series about buying and restoring old cars in the USA, but looking around it does seem that there are lots of old vehicles sat slowly decaying among the woodpile next to barns and houses. This far north salted roads are a winter fact with the subsequent corrosion issues for the local cars. Rusted sills it seems are not a road worthiness issue in New York state.

Given the nationalistic stance of most Americans I have been surprised by the quantity of Japanese vehicles. It's true there's lots of Chevrolet's and Jeeps and the HUGE GMC and Ford F150 pickup trucks and Sport Utillidy ve-Hickles are mostly US branded (even if  some of them are built in Korea), but they seem to be greatly outnumbered by foreign cars. In fact looking back around the whole journey, Japanese cars have a huge presence all over the world. I'm just surprised that the average Joe in stars n stripes allows his wallet to override his sense of national duty!

Then again I guess price, reliability and equipment will override nationalistic beliefs. 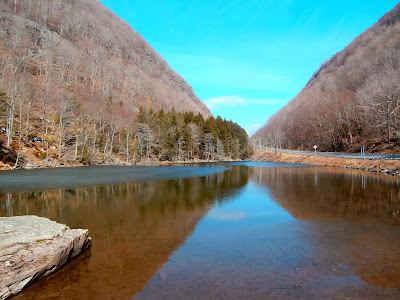 Up into the Catskill mountains there is a huge silence hanging in the trees. Out through Pheonicia and out into the hills. An overpowering sense of stillness. (strangely - not even the sound of bird calls) With ice still lingering on a pond. The silence broken by the sound of a falling tree somewhere on the hillside.

And then by a Subaru roaring past with the exhaust hanging from its tail end. Modern life just won't stay out of the way. 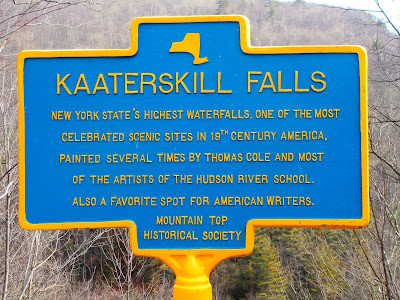 A twisting road past a "famous " waterfall that it was impossible to get close to. Apparently 19th century painters and writers flocked to the area, but the "view" was nowhere near anything envisioned in the old painting. 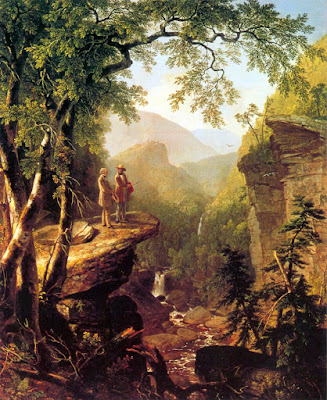 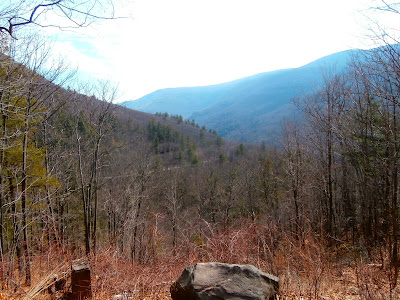 This is also the land of Rip Van Winkle.. sleepy old man! I think sleeping out the travel through america might have been a nice idea ! 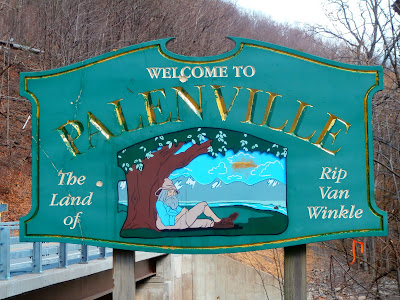 The actual town of Catskill is standard fare again for these New York state towns, which have that slightly down at heal feel. A main street with lots of empty stores. Peeling paint on the wooden built houses. Groups of unemployed watching the world go by. I've tired not to be "down" on the USA, but its obvious to me that there are lots of issues with loss of business and industry.

In huge contrast, the little town of Highland Falls is an image of affluence. Shiny new cars on the streets and several car and bike dealers with stacks of stock of big trucks and shiny cars. The reason? The town is also home to West Point. The US military academy. The war machine obviously pays well.

Back to the ever present still waters of the Hudson river. With the temperatures warming up the number of people sitting by the waters edge increases as the afternoon sun brings a feeling of spring. 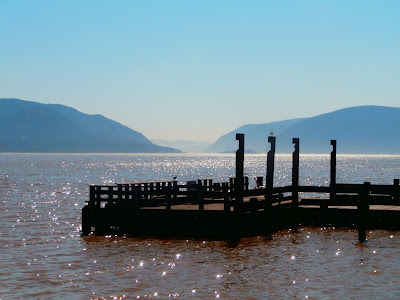